I put a truncated version of this on Forbes.com…I don’t like that I had to leave out things like Kata Mara’s awesome role as head of RIFT (her story about the monkey was quite compelling) …there’s some spoilers in here but I tried to keep it subtle…

SIDE A: AGREE “TRANSCENDENCE” COULD HAVE BEEN BETTER

[1] The “be scared of technology” theme is a personal favorite of mine and The Lawnmower Man was one of the most exciting movies I snuck into back when I was however old I was when it was in the theatre. All that I have to say about the connection to the Stephen King short story is that there is none except for the “Birdbath.” SO. “Transcendence” picks up where Lawnmower Man – should have mentioned that was also an underrated movie – left off but it didn’t stick with how society would react to such an advance in technology except for the heavy handed dialogue, “people won’t understand at first; they’ll be afraid”…which wasn’t bad, just executed with some “mmmm” obviousness. I don’t think it was Depp’s performance that hurt this movie.

[3] I feel like Rebecca Hall was the real star of this movie and didn’t get enough credit, enough praise and the cut that showed in the theatre – hoping for an extended unrated cut on blu-ray – definitely didn’t have room for her to really flex her ability as an actor, even though she was onscreen a lot. I’ve seen her in a few films and I know she has an edge; one that is a perfect blade for this film but she was kinda reduced to an obvious ‘anchor’ for Depp (an overly-over-the-top half of the love story) but I must say that the scene where Paul Bettany finds their bodies was a bad ass poignant moment…definitely felt the throat tighten up a bit. Probably the most “Pfister-via-Nolan” image from the whole movie

[4] Pfister was Director of Photography for Christopher Nolan’s films, making them visual feasts (that tilting hallway fight with Joseph Gordon-Levitt from Inception; Heath Ledger taking of his mask in the opening sequence of The Dark Knight…) that left me wanting more. If what I’ve read is accurate, a big part of Nolan’s style is that he supervises all the footage that gets used – Pfister may have shot the stuff but Nolan was supervising. And that worked out Awesome. But here, I was disappointed with the lack of ‘whoa…!’ visuals…however, Pfister was no doubt occupied with handling all other duties that come with being a director – yet, this point does bother me

[5] Whoever said that “there are no original stories left” – well, that may or may not be true but a lot of my favorite movies found a cool way of mixing and matching story threads and characters I was familiar with in a way that was Cool. All the familiar elements were exactly that in this film.
[6] I would have absolutely injected more large-scale military action: if Depp has access/control over anything connected to a network? I would have used drones, tanks, satellites…RIFT would have been tracked and destroyed, behavior patterns would have been predicted and countered…

SIDE B: “TRANSCENDENCE” WAS REALLY GOOD

[4] Cillian Murphy has been integral to several of my favorite films – “Sunshine” “Tron: Legacy” “The Dark Knight trilogy”…same goes here, he was great

[8] Kata Mara KATE MARA!!! Forget the question of “is she an antagonist or protagonist?”…she has a cause that she has total faith in and she is set in it. She and Depp are the same thing, just the opposite sides of each other. Her scene with Paul Bettany, about the monkey’s brain (nod to the Monkey’s Paw…?) was awesome. I hope to see more of her around. Also, I like her with blonde hair. (I don’t count American Horror Story; she’s better than that)

[10] The initial attacks against Castor’s ‘hive-nest’ even though they were predictably futile – they served their purpose well, delivering the promise of some large scale action sequences

[11] So much detail: Depp’s simulation of the sounds of knife and fork on plate, that Turing nod at the hotel, the love-is-blinding aspect of Hall’s character, “PINN”…that was almost as funny as the character named RAM in the original Tron

[12] Great attention to the differences and similarities of human and machine…a nearly invisible reminder of so many tech-quotes: () “Any sufficiently advanced technology is indistinguishable from magic” () “The best way to predict the future is to create it”

[13] Wraparound to Hall’s idealized concept of technology being used to improve life as we know it; in Iron Man 3, she had a great moment when she talked with Gweneth Paltrow about Wernher von Braun’s rocket (“the rocket performed perfectly – it just landed on the wrong planet.”…would probably be appropriate to mention Einstein and Oppenheimer here as well

-1- Endlessly amusing that Bettany voices Tony Stark’s AI, JARVIS…and if Age of Ultron plays out the way I think it will – well, it’s official that Bettany is not just doing voice work for Avengers 2, right?

-2- I have spoken with at least eight or nine people today who said they would wait until Transcendence is on blu-ray to check it out. I am not a film reviewer/critic but it’s difficult to put into words how much I wish this movie got more attention – and more Positive Attention

-3- Whether the opening weekend box office numbers are a reflection of poor marketing or the public’s fear of Artificial Intelligence and/or Nanotechnology, I believe this is a damn important film for people to see. I once said that when it comes time to educate kids about doing drugs, make them watch “Requiem for a Dream” … this is like that, only not nearly as grim and the point is awareness of tech

Do yourself – and potentially, all of us – a favor and See This Film. 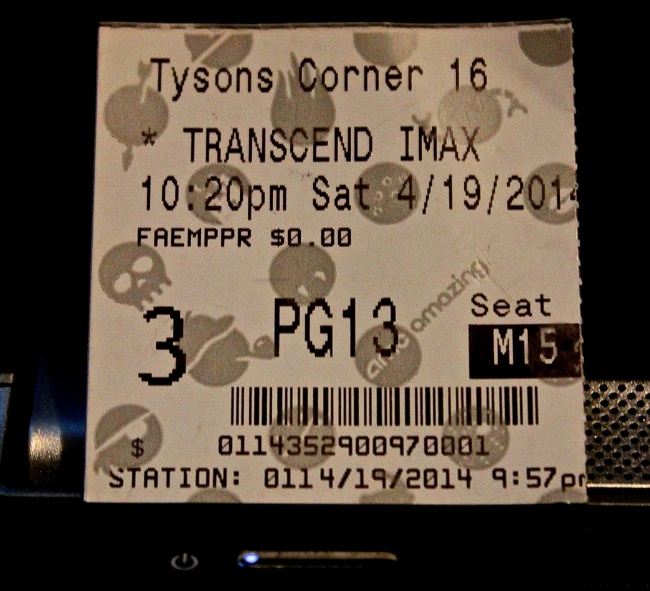